on bass guitar as they rocked their way to victory.  Their band “West Palm” played two blues-rock songs by Joe Bonamassa “Cradle Rock” and “Takin the Hit” to win the competition,

Jeff Burrows, drummer from the band “Tea Party” and “Crash Karma” representative from “The Rock” radio station hosted the evening, which showcased the top eight bands competing for the finals.  The students, from the band “West Palm” won complete sound recording systems for each member and the honour of being the youngest band to ever win. 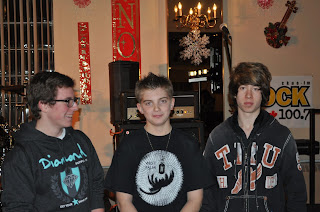 Link back to Assumption Home page